If the concept behind the Suzi Chunk album “Girl From The Neck Down” was “to make the kind of record they don’t make anymore”, then the first Groovy Uncle LP certainly had its own agenda. It’s noticeable these days how obsessed with nostalgia people have become, particularly with regard to music- tribute bands, karaoke, X-Factor cover versions, ill advised reunions- and just about anyone who has ever written and performed their own original compositions will at some point have heard the the tiresome, drunken cry from the back of the room – “Play something we know!” I’ve always found this request both irritating and baffling. Why would anyone NOT want to hear something new? Surely there are only a limited number of times a man (or woman) can tolerate yet another rendition of “Mustang Sally” or “Wonderful Tonight” before the urge becomes too great and he (or she) gauges his (or her) own eyeballs out?

I’ve often thought that one of the key factors behind the massive popularity of Mancunian magpies Oasis rests in Noel Gallagher’s ability to write brand new tunes their audience already knows. Make ’em big, bold, strident,catchy but most of all familiar-something we can all identify with and sing along. So when it came to putting together a debut album for Groovy Uncle (the first on the State Records label) I knew what I wanted to achieve and didn’t have to think too long about the title – “Play Something We Know!”. 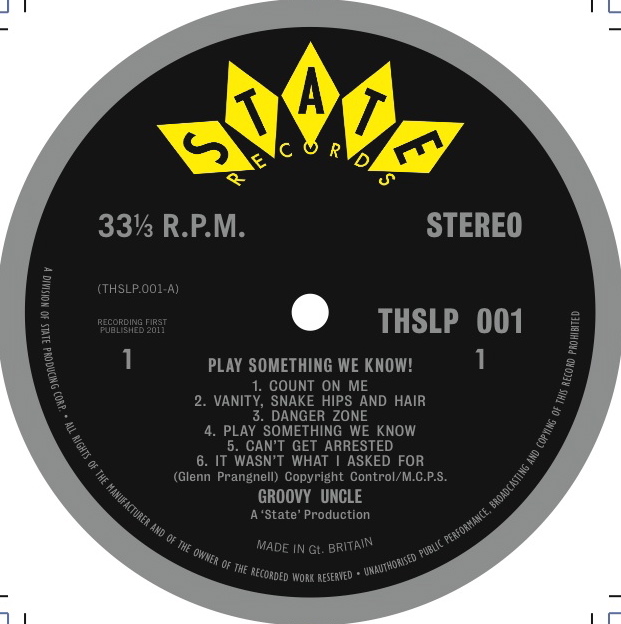 The opening track is a song I’d written back in the 90’s and had already recorded a demo of it with the band I was in at the time, Johnny and The Bandits (who later morphed into Goodchilde). The track was never released and remained on a cassette tape gathering dust but I’d always been rather fond of the song and knew it would sit nicely on PSWK. Inspired by the Tony Hatch song “Call Me” (with a nod to  “Never Ever” by The Action), “Count On Me” is a straight ahead, reassuring feel good song that sets the tone for the rest of the album. The line-up for this track: Ben Jones, Paul Moss, Mole, Glenn Prangnell.