Just got back from recording and mixing the forthcoming Suzi Chunk single “Got Up And Gone”/”Find The Morning” which we’ll be releasing on our own label, Trouserphonic Records, later in the year. It’ll be a limited release on ORANGE VINYL and the first 100 copies will come with a specially designed insert and signed postcard. All copies will contain a digital download code.

We used our studio time wisely and managed to record 5 other tracks for the next album which will be released some time next year.

A few years ago I discovered the music of Nick Drake and for a while I listened to little else. I was fascinated by the arrangements of these meandering, melancholic masterpieces and the fact that he never saw commercial success in his tragically short lifetime (he died in 1974 aged 26). I started playing around with the folk guitar tuning of DADGAD (as popularised by Davy Graham) and a chord progression began to surface based initially around Drake’s “Riverman”, a track from his 1969 debut album “Five Leaves Left”. I was fully aware that I could never compose (let alone play) anything as intricate as Drake’s but I love drawing on all my influences no matter how ambitious that may seem in an attempt to come up with something of my own so I started work on what became “Wish Away The Moon”. I began finger picking the chords while developing the vocal melody and it was at this point the song took on a more Harry Nilsson mood with particular inspiration from “Without Her”. I finished the song, recorded a demo and forgot about it for a couple of years. It was some time in 2011 when I remembered the song and offered it to Suzi Chunk for inclusion on her debut album “Girl From The Neck Down”. For some reason I didn’t think she’d like it much but I couldn’t have been more wrong. She loved it and agreed to record her version at the very next recording session. You can compare the two versions here below the lyrics.

Wish Away The Moon

Wish away the moon, take a chance and pretty soon you’ll fall

Just wish away the moon, take a chance and pretty soon you’ll fall

Monday 30th September 2013 finally saw the release of the new Groovy Uncle/Suzi Chunk album “One Vowel Away From The Truth”(Trouserphonic ZIP-1-UP) making it the third from the Groovy Uncle project and the first on our own label. “Play Something We Know!” (State Records, 2011) and “Girl From The Neck Down”(State Records, 2012) were always going to be tough acts to follow and I was never going to attempt to rehash either of those fine albums but I did want to keep all the key elements that gave those records their appeal. I decided to go for a 50/50 share of vocal duties between Suzi   and myself so we ended up with a bona fide Unc’n Chunk album. It has all the things I like from a pop record- riffs, humour, melody, vocal harmonies, wit, sarcasm, light and shade.    There are songs on there that will smack you ’round the chops and others that will give you a hug and kiss it better. Suzi’s voice is beautiful as always and everyone involved in the project worked their backsides off to produce what is, I hope you’ll agree, a damn good album! Physical copies (CD only) are available from the official Groovy Uncle Website for  £10.00 (plus postage) or downloadable from iTunes and Amazon and can be heard on   Spotify. Here is a track from the album….

(Thanks to Maurizio Melino)

Once we’d seen in the New Year my thoughts immediately turned to making a new record. This would be the third Groovy Uncle album project after “Play Something We Know!”and Suzi Chunk’s “Girl From The Neck Down”. Both had been very well received (particularly the latter) though they are very different from each other and this got me thinking it might be interesting to make the new album a mix of the two – a bona fide Unc’n’Chunk record. I already had the songs written and knew which were Suzi’s and which were mine plus a couple to duet and once again I wanted to include one or two instruments and musicians I hadn’t worked with before. On the track “Consider It Done”for example, jazz musician Roan Kearsey-Lawson did some beautiful vibe playing which became the icing on the (already lovely) cake and he did it in one take! It took much longer to dismantle and reassemble the instrument than it did to mic it up and record but was well worth the effort. Roan also brought along a set of late 19th century tubular bells which added a nice touch to “Human Scaffold”. 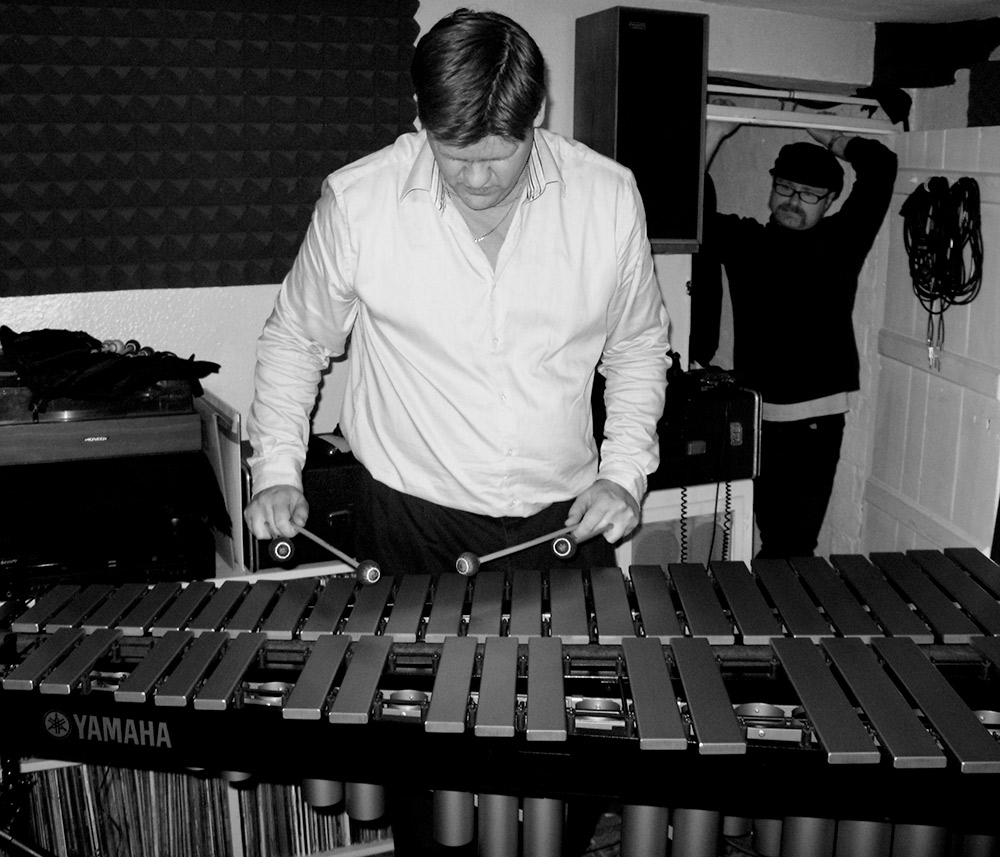 A few months ago I demoed a song called “When I Saw Love” (which can be heard on Suzi’s Soundcloud site) and thought it needed handling in a Beatles-esque, “For No-One” style. Jon Barker does some fine harpsichord type keyboard work on it but I knew I had to find a French horn player. Via the magic of Facebook I was put in touch with Neil Mitchell, a classical orchestral player who was more than happy to be involved as this was to be his first solo on a recording. We worked together on the arrangement and his playing is majestic. It gives the song a melancholic yet uplifting quality which no other instrument could have achieved. Joining us once again is John Littlefair providing the horn section on “Must Have” and “It’s Not Like Me”. Always a pleasure to work with Mr L and I love his playing on these tracks.
A number of songs this time feature the trumpet playing of John Whitaker (he of Stuart Turner and the Flat Earth Society among others) and I think his contributions really lift songs such as “Neptune Girl”, “Me And My Fair Weather Friend” and “Human Scaffold”. I’m particularly pleased former Singing Loins mandolin player Rob Shepherd agreed to work out a part for “November”. I’ve always been a big fan of the Loins and I like what he does here as it takes the GU sound to another place entirely. Peter White joins us again for some nifty keyboard work on “The Money Shot”. 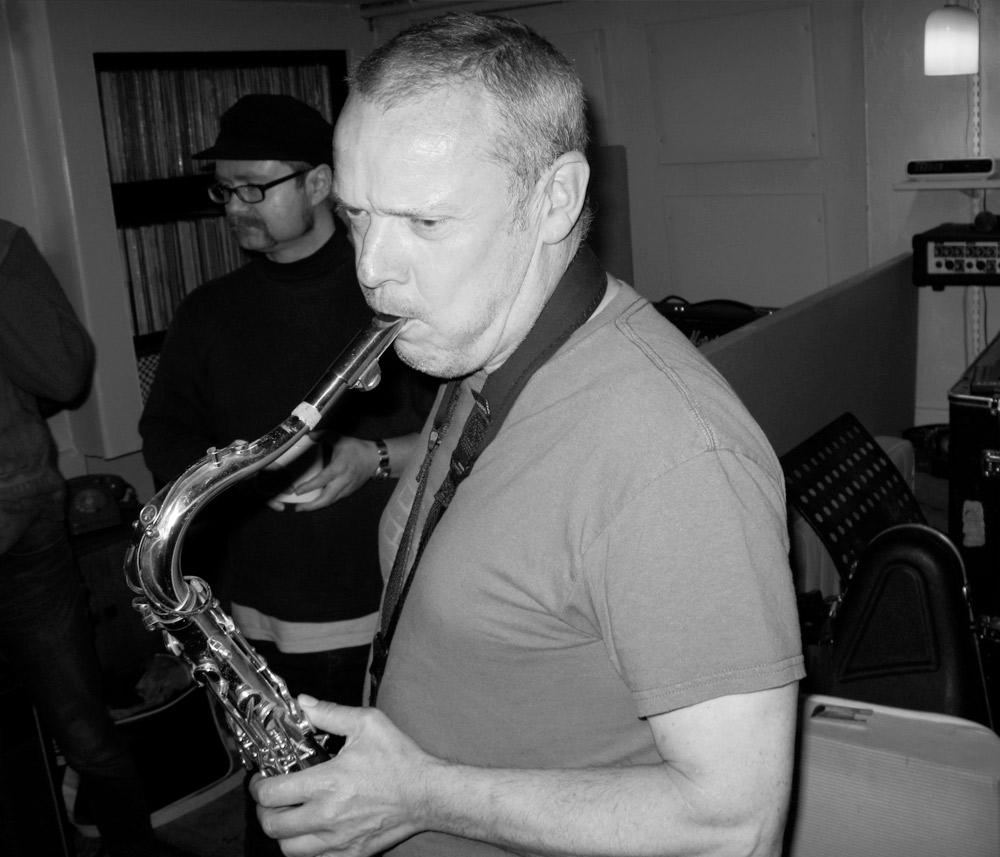 ,Of course Bruce Brand, Nick Rice, Mole, Marty Ratcliffe, Suzi Chunk and myself contributed a fair amount to the project too but more about that and other stuff later. The album is called “One Vowel Away From The Truth”  and we’ll be mixing it next month (July). Thanks to all involved. 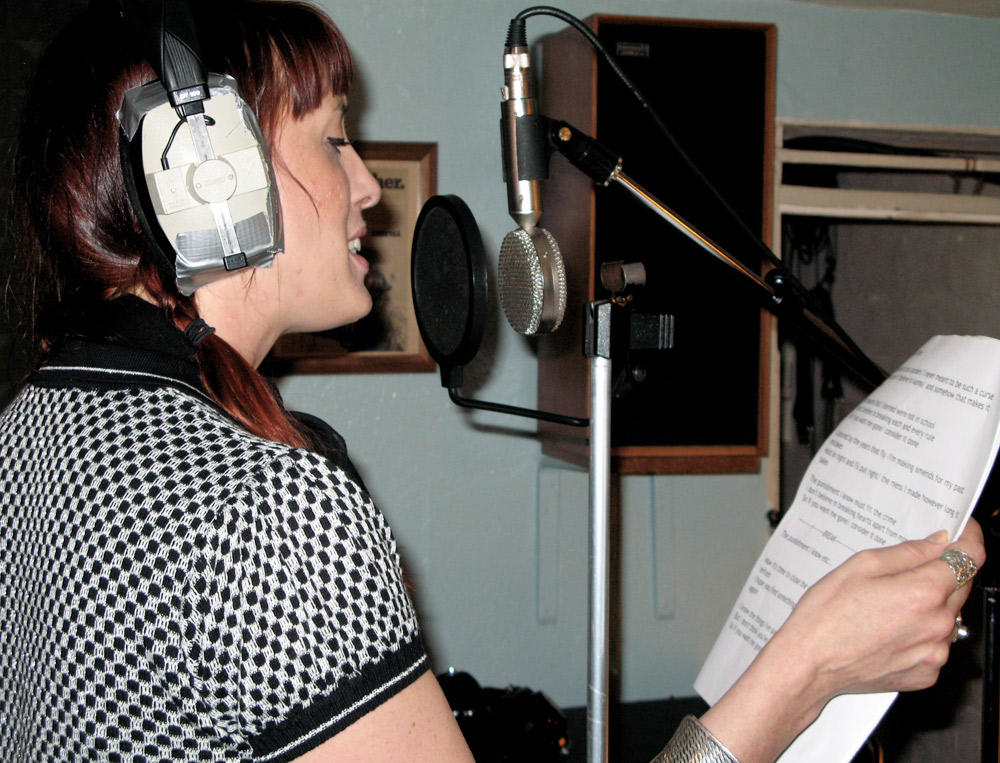