Just when I’d got all comfortable in my own musical Netherworld, writing and recording some not unpleasant little tunes for no reason other than my own entertainment. Just when I thought there would be no more official releases on the horizon, merely some home made, succulent ear food for the seemingly insatiable appetite of the My Space generation. I’d even invented an imaginary band, Groovy Uncle. So just when I thought I was beginning to wind down…. well it all kicked off again, didn’t it!  These were the noughties and I had finished with all that band/gigging nonsense in the late 90’s (all that lugging, humping and unpleasant bending!) and was left with no real desire to go back. So I plodded along building up a stockpile of demos and half written songs (some of which still have yet to see the light of day) until, in 2009, I was contacted by a friend, Ian Snowball, who told me he knew of an analogue recording studio housed in the basement of a Victorian residence down in Sandgate, near Folkestone that might be of interest and worth investigating. He was certain I would like the sound created at State Recording Studios and that their ethos- i.e to make “records that sound like records” with a no-nonsense old school approach-would also appeal. He thought they’d dig my songs too and there was a chance they’d want to release a record if the sessions were fruitful. So it was in October of that year I visited the studio for the first time to meet with Marty and Mole, mainstay of the much lauded psych-garage outfit The Higher State and co-founders of State Records. Ian’s instinct proved to be on the money-we all hit it off well and set a date for the first recording session. Trouble was, I didn’t have a band.

I knew plenty of musicians but they were all committed to other bands/projects so there was never a real possibility of getting a bona-fide, set in stone line up. I was pretty sure, however, most of them would be happy to be involved on an ad hoc basis especially taking into consideration the possibility that the fruits of their creative labour would surface on an official vinyl release. It was at this point I realised that Groovy Uncle could develop into an extremely interesting project were it to remain just that-a project rather than a band. There were no plans to gig- this was a recording venture. I began to think more along the lines of whoever is available/willing/suitable for playing on a particular track or session was in! For the first session in late 2009 the line up was Ian Snowball (drums), Paul Moss(bass/vocals), Ben Jones (lead guitar/vocals) and Glenn Prangnell (rhythm guitar/vocals). We recorded two tracks which became the debut single in March 2010 when “Monkey Trousers” b/w “Now Your Pain Is Over”(THS-003) was released on the State Records label on 7″ vinyl in glorious mono! 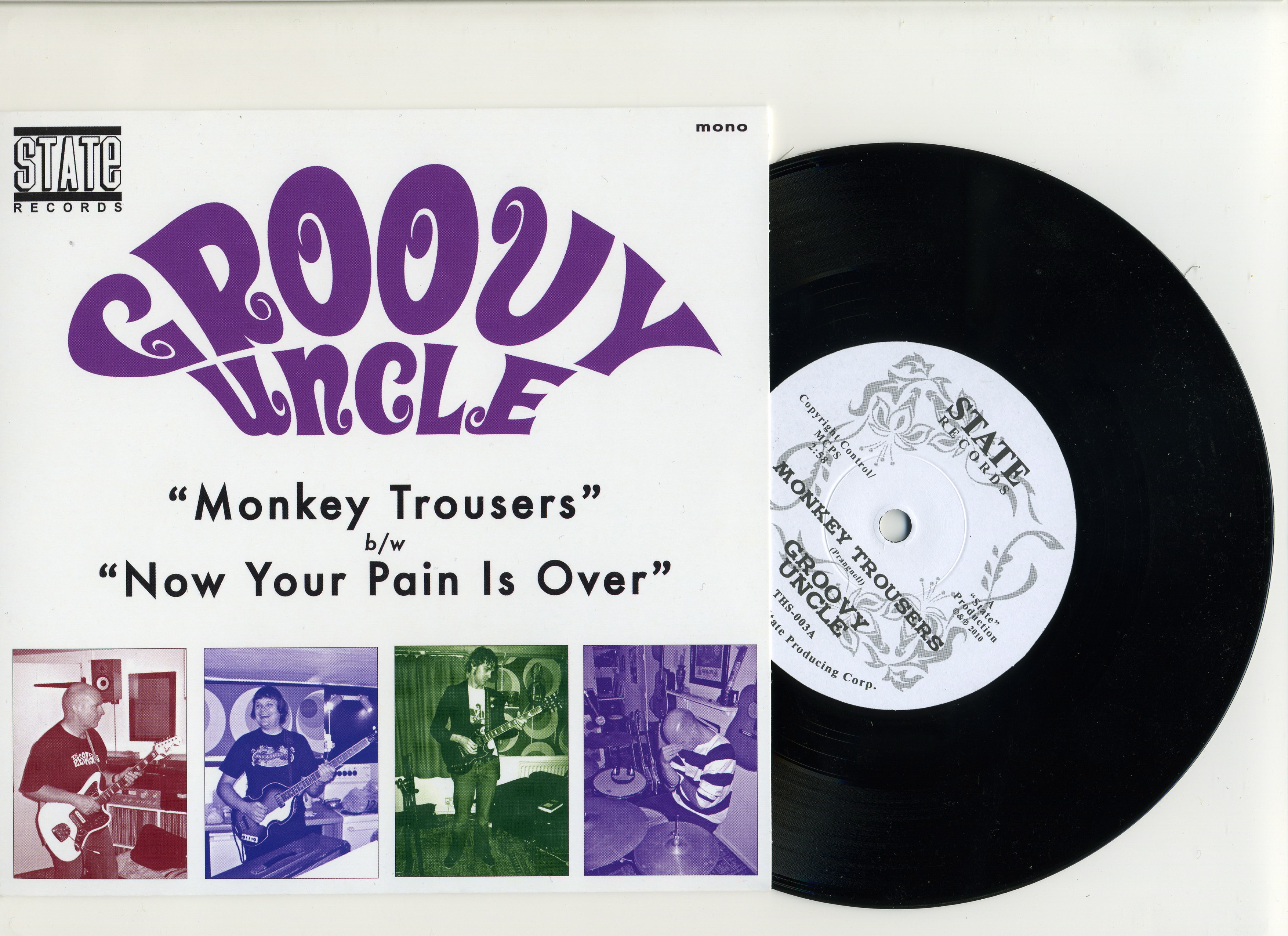 Enthusiasm for the Groovy Uncle project began to snowball (sorry, Ian!) and, after receiving good reviews and healthy sales, an album seemed the logical next step. As far as I was concerned I just wanted to work with a bunch of fine musicians and get my songs  down on tape (in the case of the debut single and album, cassette tape. Yes, really!). Releasing anything officially would be a bonus. The album line-up included those who had played on the single plus Mole (drums/bass/vocals), Marty Ratcliffe (guitar/sitar/vocals), and Allan Crockford (bass). Allan, of course, is a legendary figure on the Medway music scene having been a member of one of the Towns’ most influential bands, The Prisoners (among many others) and these days leads his own outfit The Galileo 7. We completed the album over a number of sessions during 2010 and “Play Something We Know!”(THSLP-001) was released (on vinyl and in glorious stereo!) in March 2011-exactly a year after the single. Not only was it the debut album for Groovy Uncle but also the first album release on the State Records label. 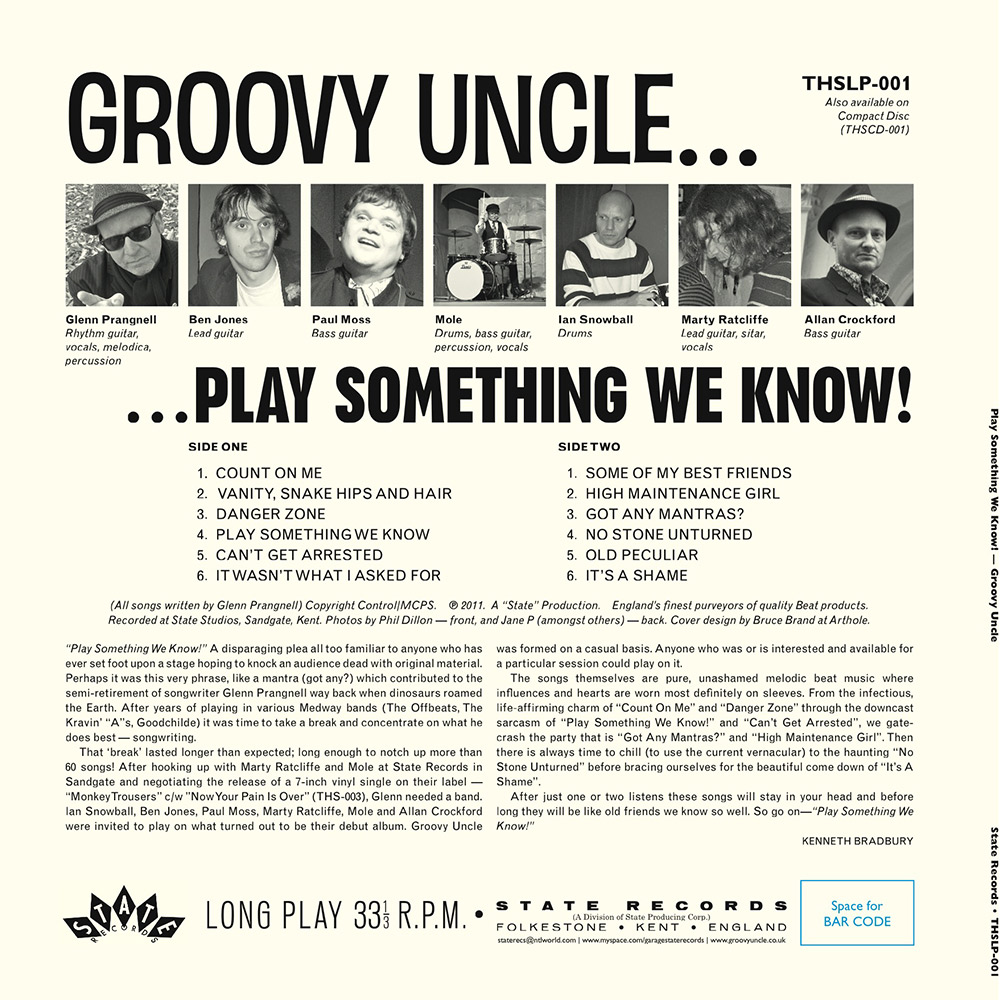 When all is said and done….

The purpose of this first blog post is just to give an outline of the Groovy Uncle story so far and I intend to return to these releases in future entries to talk in more detail about the recordings, concepts and stories behind the songs. There’s a lot to tell. Among the subject matter you’ll find heartbreak, vanity, isolation, love, regret, loyalty, yearning, suicide, mantras and trousers big as houses. And that’s just the first album!  We’re already underway with the next LP and single which, strictly speaking aren’t GU records at all. Yes, 2012 sees the Groovy Uncle/State Records team working hard to bring you the debut releases from Cardiff-based,Teesside born “singist”- the unstoppable Suzi Chunk.

More on that story later….

I'm down to the last 6 CD copies of 'A Clip Round The Ear'. There will be a repress at some point but in the meantime you can grab a copy at https://t.co/oFto91uSst :-) #groovyuncle #suzichunk #trouserphonicrecords

Working on a neat little instrumental that (unusually for me) I wrote on piano. So far it's just piano, bass and drums and it may end up with no guitar at all. I'm liking it a lot!

@AdhocAtheist It was a comment posted by someone after an article in the Guardian.

“A government drunk at the wheel, an opposition complimenting them on their driving and a national media supplying the booze.”